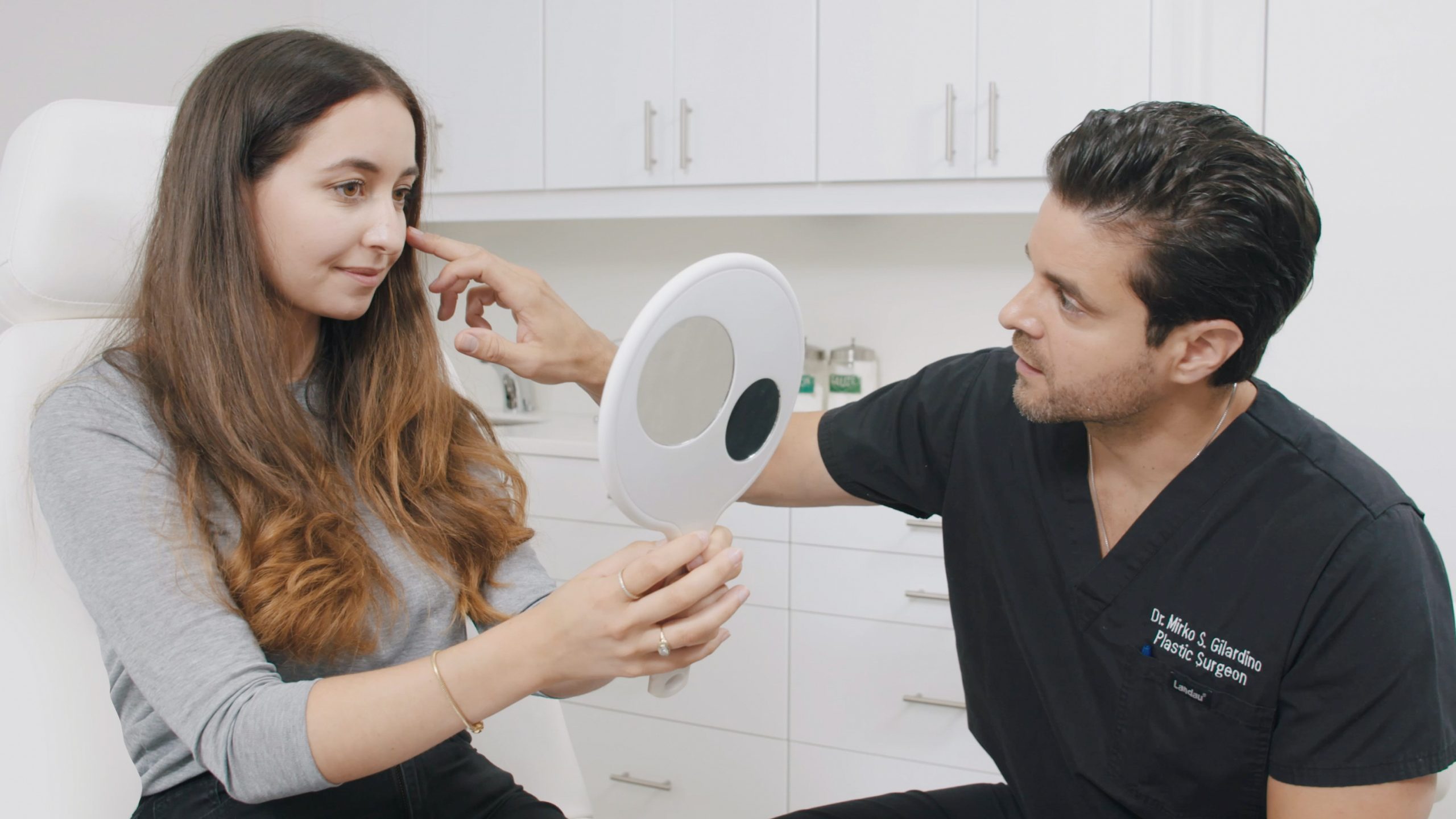 “I feel so much better about myself”

Turning 60 was very hard and passing by a mirror got even harder so I finally decided that I was going to spoil myself and get this set right, I have to say that I am so happy with the results, I feel so much better about myself. I have to thank the staff, Annie, Pam, Cindy and Gaby, they were amazing and so nice. I felt calm and in good hands as soon as I walked into the office, they were attentive and made me feel relaxed. Thank you girls! Dr. G. did a wonderful job and I am forever grateful.

“I am forever grateful”

Dr Gilardino distinguishes himself by being at the pinnacle of two often very different worlds, science and art. He has unmatched skills as well as caring manners both before and after procedures. My results are beyond my wildest expectations and I am forever grateful. It is no surprise that children and their parents worldwide have recovered their smile thanks to him.
His team is clearly handpicked to all share these same genuine values of kindness, dedication and respect.

I previously had a bbl, lipo 360, breast implant removal and a breast lift in 2018. I wasn’t crazy about the shape so I went in for a second surgery to correct that and also to fix the fat necrosis that developed. At this point I had already invested almost 40k into these surgeries with a different doctor. Then the pandemic started and I couldn’t see my doctor and I looked worse than when I started. I was given Dr Giraldino’a contact and promptly made an appointment to see what he could as it looked like I had dents in my left butt cheek which made me so self conscious. He suggested taking fat from my arms, back and side boob to fill in the areas but would go in first and break up the scar tissue and then fill it up again. I had the surgery Monday and I already feel so much better after this surgery. Mind you it’s only been a few days since I had my surgery but I can already see very positive difference. With all DR Giraldinos accolades you understand why he is so pricey. He’s double certified here and in the US and also is the head surgeon and head of the board of plastic surgeons at McGill university. He’s a great doctor and his staff went above and beyond! I will update once I’ve healed.

“A caring and professional nature”

We were referred to plastic surgery at the montreal children’s for our 18 month old with congenital torticolis and Dr. Gilardino took care of things immediately. He demonstrated a caring and professional nature while ensuring us that our daughter would be in the best possible hands while undergoing a surgery to release the muscle.

We are absolutely shocked at how things have improved since the surgery and we cannot thank Dr. Gilardino enough.

“The results were noticeable immediately”

My son David has been a patient of Dr. Gilardino’s for several years. He has a genetic disorder that in his case caused a distortion of his face on one side. Every time we have met with Dr. Gilardino, he has shown David such kind and compassionate care. As David got older, the distortion was more noticeable and David became more self-conscious of it that daily life, especially at school became more difficult. Dr. Gilardino always explained to us exactly what surgery would involve. In August of 2016, he performed surgery on David, and the results were noticeable immediately. Now, David is no longer self-conscious of his appearance, and it has given him confidence. The surgery has completely changed his life and he is so pleased with the results. Dr. Gilardino, we can’t thank you enough for what you have done for David.

I had a breast reduction done by Dr. Gilardino. He took the time to answer all my questions ahead of time. Reassured me of post-op issues that may arise and was there for EVERY question. He knows his craft like no one else, has awesome bedside manners. He is human, personable and you can trust him implicitly. Thank you for everything you do Dr. Gilardino. Three years later and I still look good!

“I feel privileged to call him my doctor”

He is the best! Very professional and at the same time very caring and personal. You never feel you are a number. If he feels you are going too far with a decision he will let you know. I feel privileged to call him my doctor.

“He works miracles on these children!”

My daughter has been a patient of Dr. Gilardino’s for several years now (she was born with craniosynostosis). Not only is he great at what he does, but he also has the patient’s best interest at heart. He is kind, empathetic and most of all, a great surgeon. He works miracles on these children! As well, his team is great! At every appointment, he has made us feel at ease and always answers all of our questions. Olivia will require touch-up surgery in a few years but we know she is in great hands! And as a parent, this is very comforting.

For the past decade I’ve felt like I was no longer in the driver’s seat, when it came to my body. I’ve been through several years of fertility treatments, then pregnancy and childbirth, and finally peri-menopause at the age of 41! My breasts were different cup sizes which made finding bras and clothes that fit properly extremely challenging. I had lost hope of ever feeling good in my body ever again. Then all that changed for the better after going to Le 1620.
Three words come to mind when thinking about the team at Le 1620: integrity, professionalism and compassion. Dr. Gilardino could have told me what I wanted to hear, instead he told me what I needed to hear which gave me the power to make my own informed decision. Since my surgery, I feel like I have been given back my freedom. My clothes fit properly which, in turn, has helped resume activities that I haven’t done since before my pregnancy. I have a new lease on life and I am eternally grateful.

His approach is first understanding what you are looking to accomplish and then providing you with recommendations. I went in looking to remove extra skin around my pectoral and lower abdominal area due to substantial weight loss. There was no pressure when dealing with him. I felt like I was talking to family. He had my best interest at heart and assured me that I was in good hands. He lived up to his assurances; my surgery was performed successfully and I feel better than ever, both physically and mentally. Dr. Gilardino’s success does not only come from his surgical skills, but from the great staff that surrounds him. His staff was there for me throughout the entire journey. Early mornings and weekends, always making me feel well taken care of. Special thanks to his entire team!

Our goal is to provide an exceptional experience, optimal and beautiful results. Our team would like to thank our patients for their trust and we look forward to reading your feedback.